There was an enormous revival of interest in Classical and Renaissance art from about 1850 through archaeological discoveries and important excavations in Greece, Egypt and Italy, like the excavation of Pompeii as wel as Napoleons Egyptian expedition

The Empire style was encouraged by Napoleon’s desire for a style inspired by the grandeur of ancient Egypt and imperial Rome.

The Egyptian Hall at the Great Exhibition of 1851 and the displays of antiquities at the British Museum inspired many designer and fuelled the imagination and fascination of the people, they wanted to incorporated their motifs into jewelry, furniture, glass and Art pottery

By the 19th century the higher class were able to travel to Italy to see the original sources for themselves.
Highly collectable nowadays are the socalled Grand Tour Souvenirs

Ornamentation, motifs and prints of ancient Greek, Rome and Egypt where the leading ....like decorative symbols of triumph, scarab beetles, sheaves of grain, and cornucopias for prosperity; and fasces and sphinxes for conquest, lotus blossoms, Pharaoh's heads, obelisks, the winged disk symbol of the sun God.

Myths and stories from both the classical Greek and Roman traditions will give you a vast source of decor inspiration for your scheme.
Look at the paintings of Sir Lawrence Alma-Tadema for inspiration

In both Greek and Roman homes, you'll primarily find furniture made from wood. Greek designs tend to be simpler and more sparse than Roman furnishings, which may be carved with animal feet or equipped with intricate scrolls and design.
Look for simple furniture with wood, stone, ceramic, wrought iron. Tripod tables and stools are much more common than the four-legged tables and chairs, as this tripod design makes it easier to balance the furniture on a rough or uneven floor. Since ancient times, mosaic-topped tables have featured heavily in Roman design. Metal or tortoiseshell inlays are also common.
Chaise-longeus are also a good choice

In Holland, Germany and Austia the Empire style was called the Biedermeier style and in England the Regency style 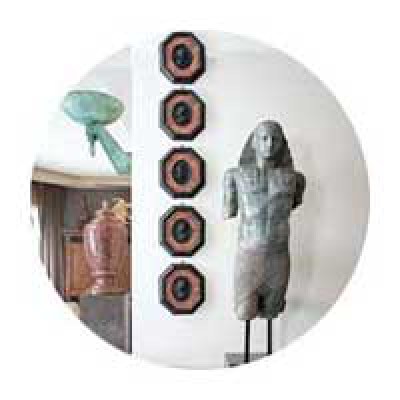