Vintage interior design refers to the 1940's and early 50's. It is an era that most people remember either from their own childhood,  or from the homes of grandparents with wonderfully nostalgic and feels.

Vintage should not be used in reference to an object less than 20 years old, and the object should be somewhat representational and recognizable and clearly representative as belonging to the era in which it was made.

"Midcentury modern" itself is a difficult term to define. It broadly describes architecture, furniture, and graphic design from the middle of the 20th century, mid 1930s through 60s.

This design style has never totally gone out of style till nowadays. Some people with good taste and design enthusiasts never did get tired of it and it sort of evolved into a kind of Scandinavian design concept.

It's a great style full of clean lines and designer chairs and lots of linear feel.  It has the ability to be warm and sober at the same time. Simultaneously, the 90s brought about reissues of many iconic midcentury designs.

A new start....that's what Europe needed after World War II.
It was an exciting and revolutionary time in which the European started to rebuild and renew their society with an an explosion of very stylish, straightforward Midcentury Design

Due to small housing the designs were minimalistic and space saving.

The fifties were the beginning of a totally new way of living, which showed in society, art, architecture and furniture.
Designers designed some of the most innovating pieces which are still very modern today. The furniture designs are no-nonsense: plain, simple, colorful, very basic and light weight, cheerful and have a positive feel.

Furniture created in the Mid-Century Modern style offered geometric shapes, organic curves, clean lines, use of traditional and unique resources,  and an emphasis on contrasting materials.

The pieces were devoid of ornamental details and highlighted functions like the contructions of 'post and beam' fair in sight.

Basic function of a piece of furniture is important not it's shape, function = shape.

Pure shape, onest materials ( natural wood and leather) eye for detail, quality of the workmanship and the best that money can buy.

Scandinavian inspiration brought about the use of teak wood,  which offered warm color and durability to furniture.

Oak, rosewood, and walnut also made attractive Mid-Century Modern pieces.
They worked well with the color palate and organic lines and give the room just the excitement it needs.

There is a lot of appreciation for the Dutch mid-century designs world wide because they represent the perfect combination of form and function: rational, functional, practical and affordable at the same time.

At last some few lines about Maison Jansen

Considered to be the first truly global design firm. With fashionable clientele worldwide the house provided design services for European royalty and the redecoration of the White House during the Kennedy period.

In the seventies of the twentieth century, Jansen clearly distinguished itself from major designers as a precursor of a distinctly contemporary style (for example furniture of brass and chrome) by working with designers as Willy Rizzo and Guy Lefevre.

Nowadays the interiors of the filmsets and filmstars of the mid-century like Brigitte Bardot, Jane Fonda,  are en vogue
A lot of glass, mirrors, brass, gold. 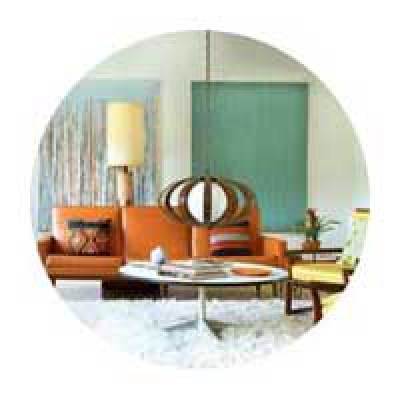