Retro Style Decorating actually  describe almost any interior decorating themes that are influenced by trends and styles from the past.

Just about any era could be considered "retro", but the term is more commonly used to describe decor from the 1950's, 60's and 70's. Go back just a little farther and you're bridging more on vintage style, although the two styles can (and do!) frequently cross over.
Retro  usually has a fun, lively feel to it, with bright colors, wild designs and an overall sense of funky "flair". Just think back at the Rock and Roll and Pop Art era

The retro rock style of ROCKABYLLY is really one of the most exciting things in the interior designing. It is a great choice for people who love the rock and old school music and the atmosphere of an old school bar

The interior style of rockabilly home decor involves the use of retro themed things like jukeboxes, rock band pictures, old motor bikes and old American cars and many other old school rock things

It reflects the pure punk rock style from the 1950’s.

A rockabilly house is a quite cold house interior design since it looks retro without having to look too outdate, is actually very easy to follow, this retro style mix well with most other kinds of furniture and is easy to find on flea markets and on the internet

In many of rockabilly home decor ideas, people will see that the color red is the most significant influence in rockabilly style.
Also black since rockabilly is a rock music style, and think of chartreuse, turquoise and white.

Popular culture known as POP ART style emerged in the mid-1950s and was seen as being for the younger generation, but really became popular in the 60’s, where Music, Fashion and Art blended together
It was all about the idea of mass marketing and mass consumption.
Many women were housewives, therefore the image of the perfect American housewife started to polish and advertisements for American kitchens
which were futuristic, big and practical, were shown on TV; as well as for Whirlpool dishwahers and vacuum cleaner.

Artists tried to make a point on how much things were consumed, everyday objects became art.
It challenged tradition and it was the idea of moving forward using bold bright colours,screaming or popping out of the striking images, posters and collages, the share of creativity and the loft spaces

Pop Art realised it's full potential in New York where it got all the attentions from the art world.
The American life style became advertised as new, perfect, clean, and seamless.

During the 1960s, Roy Lichtenstein ( he produced hard edge art work inspired by comic strips and American advertising) along with Andy Warhol ( think off his prints the Campells soup cans and of famous people like Elvis Presley, Marilyn Monroe ),
Jasper Johns ( became famous with his paintings of the American Flag)  and James Rosenquist ( fabous of his gigantic art works related to advertising objects)  among others,  became a leading figure in the new art movement

It was the bohemian studio of Roy Lichtenstein became a favorite source for the development of many of our today interior loft areas.

It was on July 20, 1969 when Neil Armstrong landed with the Apollo 11 on the moon and made his first step onto the lunar surface. It became a big step for the Nation.
It reflected strongly in Fashion, Architecture and interior design
In the 70’s interiors became more clinical, clean and futuristic almost spaceship-like. It was not anymore clear what room a person was in.
Mouldet plastic walls and cycadelic wallpaper were main interiour elements.
Tables were rising from the floor. Bold colours like orange, brown, purple and yellow were used on almost hallucinogenic all papers, almost as on a LSD trip.

Another icon of that era was the Bubble House (Palais Bulles) the groovetastic love child of legendary French fashion designer Pierre Cardin and Hungarian architect Antti Lovag.
Located just outside of Cannes, this groundbreaking achievement of eccentricity, extravagance and organic components was built from 1975 to 1989 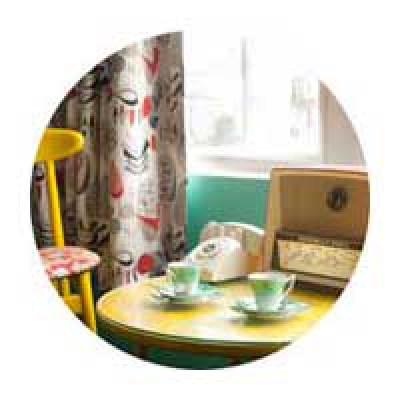